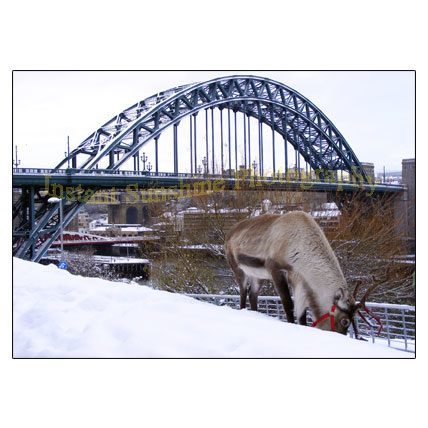 The second in our series of blogs about selecting our products looks at our range of North East Photographs… All of the products you see on North East Gifts have been hand-picked  by our team.

I first saw Andy Campbell a couple of months ago when I visited the Newcastle Quayside on a Sunday morning for the first time in years. I was admiring some food (as I do) on a stall near to Andy’s stall. When I caught up to my wife Ann she was at Andy’s stall listening in to a conversation Andy was having with a lady (as she does). The lady was wanting to buy one of Andy’s photos which was of a reindeer under the Tyne Bridge (all will be explained about the reindeer soon). In the photo was a bench which the lady and her family had paid to be placed there in memory of their mother who used to love to stand there looking at the bridge. If you look at the photo the you can see the arm of the bench which is covered in snow.

When the very happy lady left with her photo I chatted to Andy and told him about our website. Andy then told me about the reindeer photo. In 2009 he was at the Quayside’s Winter Festival in the build up to Christmas but it was a bad winter with heavy snow. Andy was walking around when he passed two animals grazing under the Tyne Bridge which he automatically dismissed as horses but when he took a second look he was surprised to see two reindeer. Someone had brought two Cairngorm Reindeer down from Scotland as a novelty children’s ride but unfortunately the bad weather prevented a good public attendance. Andy immediately got his camera out (as he does).

I arranged to meet Andy the following week in The Slug and Lettuce on the Quayside (where some of his photos are displayed). We had a good chat and when Andy showed me his photos I realised that a lot of the photos (like the reindeer) have a story behind them. When Andy agreed to join our website I was very pleased and know there will be other stories to tell in future blogs.